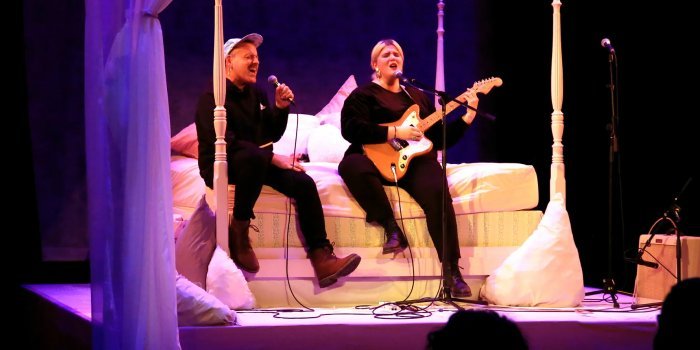 Director Baz Luhrmann re-visioned Shakespeare’s classic tragedy into a modern, angst-fueled cinematic touchstone, launching its young stars Leonardo DiCaprio and Clare Danes, into superstardom. It simultaneously crystallized the tormented nature of young love into a 13-song track list that rides like a wave: poppy, dirty, sweet, fun, sad and sexy. The songs are quintessentially 90’s and activate deep nostalgia for a generation of movie and music fans.

In 2013, Kim and Stewart presented this soundtrack in an evening of twinkling angst, nostalgia, and the pains and joys of love at the beloved Company House. A decade later, these two award-winning musicians and frequent collaborators dive back into this musical tale of tragedy and woe, bringing it to the Alderney Landing stage in support of Eastern Front Theatre.

This concert has cabaret-style seating at tables of four, with tiered PWYC pricing
starting at $25.