With the incredible war drama 1917, cinematographer Roger Deakins has created one of the most ambitious, intensely beautiful and epic films of all time.

From Blade Runner 2049 & Fargo to Sicario, the long-time collaborator with this film’s director Sam Mendes, has an extensive resume. But here, he quite literally makes the audience feel like we’re following two soldiers through a journey to warn troops of a German trap during World War I.

It feels as if we’re seeing one continuous shot for two hours, and it’s magnificent. Mendes — known for American Beauty and Bond film Skyfall — also makes the movie of his career, and with Golden Globes for Best Drama, Best Director and 10 Oscar nominations, it is a wonder of a film.

It hinges on two young stars in Captain Fantastic’s George MacKay and Game of Thrones alum Dean-Charles Chapman, and they’re more than up to the challenge. With Colin Firth and Richard Madden along for the proceedings, I can’t express enough how much I loved this journey.

The best war film since Saving Private Ryan and one of the greatest in-cinema experiences in years, this one has to be seen on the big screen. 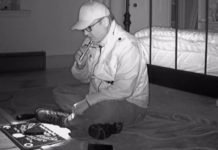