A remount from last summer, Neptune Theatre returns with The Argyle Kitchen Street Party, a kaleidoscope of tunes, new and old, from Canada’s East Coast.

Featuring four quadruple (quintuple? sextuple?) threats, The Argyle Street Kitchen Party is an homage to an era where cell phones were not attached to everyone’s hands, and you could have a few drinks before stumbling home from a friend’s place after a night of music.

Conceived by Ian Sherwood and Neptune’s artistic director Jeremy Webb, with direction by Laura Caswell, the four performers saunter on to the stage at the start of the show with a hearty welcome, instruments in hand; no fuss, no muss.

For the next two-plus hours they play, sing, and dance around Andrew Cull’s picture perfect set, and through Vicky Williams’ warm and welcoming lighting.

Celia Koughan shines early with a haunting rendition of “Song for the Mira.” Whether she’s tapping up a storm across the stage, or fiddling her heart out, Koughan fills the room with warmth.

Malia Rogers’ incredible voice was highlighted in “Sonny’s Dream” and “The Mary Ellen Carter”. Her open-throated and heartfelt offerings were enhanced by her percussive work throughout.

Playing the keys, both piano and accordion, Karen Lizotte, visibly pregnant, was “playing for two” through the program with her earthy tone a joy to listen to throughout multiple songs, including one about the Sea of Galilee.

It was wonderful to be introduced to Ian Sherwood, an incredibly gifted performer and songwriter. His original song “Not Alone Tonight” was a fantastic mix of story and song, a truly east coast delight.

Sherwood’s job as music director was also evident in the tight four-part harmonies and beautiful medleys which flowed. Kudos too to the uncredited sound designer who not only kept multiple voices pristine through the evening, but multiple instruments as well.

As talented as each of the performers are in their own right, when the four came together it is like church. Whether Joel Plaskett’s “Nowhere With You” or a Rankin family medley, the quartet have such an undeniable rapport that it is obvious why Neptune Theatre decided to bring the show back.

Every performance features a special guest who pops by the kitchen. At this particular performance it was gifted storyteller Charlie A’Court, whose song “Josephine” is sure to leave a lump in your throat.

While The Argyle Street Kitchen Party may not be everyone’s idea of a night out at the theatre with no discernible plot or tension, for this West Coast transplant it sure did make me feel happy to have relocated. The only quibble? There is no recording of this fantastic cast singing these wonderful tunes.

The Argyle Street Kitchen Party, conceived by Jeremy Webb and Ian Sherwood. A Neptune Theatre production. On stage at the Scotiabank Theatre (1593 Argyle Street, Halifax) until August 25. Visit neptunetheatre.com for tickets and information. 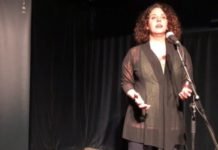 Watch: Live at The Carleton with Laura Caswell

Updated (May 25): Halifax musicians to perform in a series of virtual concerts Live at The Carleton

Watch: Live at The Carleton with Kristen Martell