In a media release, Neptune Theatre has announced its scheduled summer productions of The Argyle Street Kitchen Party and The Rocky Horror Show have been postponed.

The announcement follows the postponement of Billy Elliot: The Musical, scheduled to have closed out the company’s 2019-2020 season.

“This was a difficult decision in terms of the impact on the theatre, the artists and crews, but a necessary and important step in the best interest and well-being of our community,” says Jeremy Webb, Neptune’s artistic director in the release.

Webb emphasized these are postponements rather than cancellations, as the Halifax theatre company hopes to mount all three in the future. Timing for rescheduled performances will largely depend on the guidance from public health officials, who will determine when Neptune can safely reopen.

“Ensuring the health and well-being of our patrons, artists, and employees are of paramount importance,” says Neptune’s general manager Lisa Bugden. “We are planning for the future and taking the necessary steps to ensure people feel comfortable and confident in returning to Neptune Theatre.”

Relying heavily on ticket sales, the company admits to being in a vulnerable situation with the possibility of a reduced season. Revenues are already down 94 percent from the same period last year.

While its stages continue to be dark, Neptune continues to connect with its patrons with Off the Leash, a Facebook and YouTube chat show. Hosted by Neptune Theatre’s artistic director Jeremy Webb, the show runs four nights a week featuring special guests. Its theatre school also continues to offer a range of programming on social media. 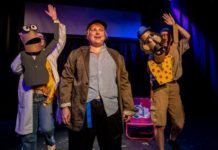