A fixture in the Halifax music scene for years, singer-songwriter Dusty Keleher has been making his career as a musician since the mid-1990s.

A consummate storyteller, Dusty draws on many musical genres that take their cue from ancient Irish ballads, and no better example comes from the single Connemara Moon, which is also the title of his upcoming album.

His newest since his Music Nova Scotia-nominated The Way to Grace in 2018, he says Connemara Moon will drop sometime in 2021.

Besides being a musician, Dusty is also a tour guide with The Halifax Ghost Walk in which he leads tourists and locals alike through the streets of Halifax during the summer. And while an interest in the supernatural may not sound like it would mesh with the life of a musician, Dusty says it is all about storytelling. It also gives him another outlet for his studies of folklore and Irish storytelling techniques.

Halifax Presents contributing editor Mark Robins was live at The Carleton in downtown Halifax with Dusty, who not only performs the title track from his upcoming album, but he finds out more about the musician and his career.

One of Halifax’s preeminent music venues, you can find out about the upcoming shows at The Carleton by visiting thecarleton.ca. And be sure to like and follow the Halifax Presents Facebook page to be alerted next time we go Live at the Carleton.

Editor’s Note: Please note that The Carleton announced on March 16 that it will be closing its doors and hopes to re-open on Sunday, April 5. Dusty’s show mentioned in the video on March 21 will not go ahead.

Live at The Carleton: Dusty Keleher

Halifax singer-songwriter Dusty Keleher joins us at The Carleton to perform one of his original songs and we chat with him to find out more about his career and music.To find out about all of the upcoming shows at The Carleton including Dusty’s performance on March 21 visit https://www.thecarleton.ca. 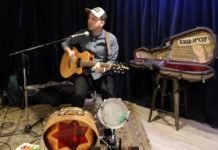 Watch: Live at The Carleton with Chad McCoy 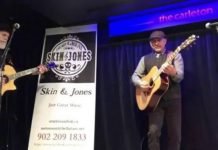 Watch: Live at the Carleton with Skin & Jones