Separately they are known as Aquakulture and Ghettosocks. Together they are making waves as Aquasocks.

Nominated for six Music Nova Scotia Awards this year, including entertainer, hip hop, and recording of the year, the duo has found a sound together that has obviously resonated.

We caught up with them via email between gigs to find out more about their collaboration, how their sounds came together, and what the future has in store.

This interview has been edited.

The name Aquasocks has an obvious origin combining your two performance names, but tell us how you came up with the names Ghettosocks and Aquakulture.

AQUA: Aquakultre stems from my being a plumber and my love for music. I changed my name from Lex a couple of years ago because I felt like I was limiting myself to what I could do. Aqua represents my career choice as a plumber, and Kultre (culture) has everything to do with music and what it has done for me over the years.

SOCKS: My name was an unfortunate nickname that stuck.

When and how did the collaboration between the two you start?

AQUA: Socks and I have known each other for a while, and have had an appreciation for one other since the beginning. It all started with a beat pack sent by our homie Intjay, formerly known as a Bix, that was layered with such open free jazz tones that it both had us writing instantly, and consistently. It started as a five-song EP but escalated quickly for a full-length EP once we realized how fast we wrote the first five. Socks curated a couple more beats, while Fes (DJ Uncle Fester) hooked us up with Abu Dhabi, Wires, and Wires remix, and another one of my homies Gooniez splashed us with Trump Tight at us, and it was game time from there.

SOCKS: Basically we were hanging around a lot and we were doing shows together and became friends, then we decided to start making music together.

Your music individually is described as being quite different. How did you reconcile your styles to come together?

AQUA: I  have a love for both rap and RnB, and when the time calls for it, such as this, I always love getting back to the pen, the bars, true hip-hop. Socks been putting it work for years in the scene all over Canada, and to get to work with him on a full-length project was crazy cuz he’s always been one of my favourites. My bars originate from the streets, and Socks brings that wizardry, that wit, knowledge in everything. Colliding both worlds was easy when y’all good friends from the beginning.

SOCKS: We have similar sensibilities and a broad appreciation for music and art, so it was easy to vibe off of each other. Lance is also probably one of the easiest people to get along with, so that also helped.

Is the Aquasocks music different from what you do individually, or is it a combination of your two styles?

AQUA: We both allowed ourselves to be who we are generally as artists with this collab. I do a little bit of singing on there, rapping, and Socks does what he does best. My solo stuff is a lot more RnB based, and I wanted to make sure I included that style within Holos to let people know there are no limitations to Sipset.

SOCKS: It’s pretty much a hybridization of our two sounds. There are similarities to what we do independently as well as differences. To sum it up, it’s a snapshot of a certain moment in both of our lives.

You are up for multiple Music Nova Scotia Music Awards for your debut album Holos, as well as entertainers of the year. Were you surprised by the nominations?

AQUA: I was totally surprised. For one I didn’t even know that we submitted hahaha, shout out to Socks for putting in that work. It’s amazing to be recognized for the work we do, connecting with the audience is what we do this for.

SOCKS: It’s always a surprise to me whenever I get nominated for anything, especially for this album because we got virtually no media support or reviews from traditionally supportive outlets. It’s good to know it made it to someone’s ears.

What do the nominations mean to you as artists?

SOCKS: To me, it means we had a good year and left an impression in the music scene. It’s flattering. We also want to emphasize the team effort that went into the project. Thanks to Bix/Intjay for the majority of beats, Gooniez for his contribution, Shevy Price and Chudi Harris for their vocal features, Kev and Kumud at Black Buffalo Records for putting out the record, Joolsannie for the dope artwork, and finally big ups to Fester for the production, recording, engineering, cuts, blood, sweat, and tears (from laughing hopefully) he put into this thing.

AQUA: Who knows. We’re both very busy cats, and there will definitely be more to come. It’s just all in the timing from here.

SOCKS: Aqua has a big album coming out with his band in the new year called Legacy. I have a few projects in the hanger. We have a new song ready towards the next album, but no said release date yet. Hopefully, we get invited to play at Nova Scotia Music Week in Truro. Haha.

The Music Nova Scotia Awards will be presented on November 10 at this year’s Nova Scotia Music Week in Truro. For a complete listing of all the nominees visit musicnovascotia.ca. 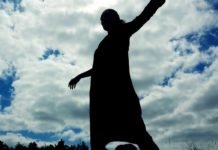