In late 2019, Shakespeare By The Sea (SBTS) launched its Indie Theatre Residency Program. Designed to give independent theatrical work in Halifax a home, its aim was to provide companies without significant financial resources to use SBTS’ Park Place Theatre as a venue for the rehearsal and production of their work.

Putting a call out to independent companies, collectives and individuals, SBTS was on the lookout for new works, a reimaging of an existing play, or those looking to develop a collective creation. By helping to eliminate much of the financial risk in producing theatre, SBTS’ hope was to nurture the next generation of theatre-makers.

The inaugural theatre company to take advantage of SBTS’ residency program is The Unnatural Disaster Theatre Company, which will present Forest Town, an anthology of short plays exploring the historical and continued mistreatment of women.

“We’re really excited about the Indie Theatre Residency and to have Unnatural Disaster with us this month,” says Drew Douris-O’Hara, artistic associate of Shakespeare by the Sea in a media release. “It’s so fantastic to have this up-and-coming independent company lighting up our building.”

For Forest Town director and the artistic director of The Unnatural Disaster Theatre Company, Logan Robins has chosen to describe the anthology as a “theatrical experiment in creation” for two reasons. The first is the practical notion of being the initial group for STBS’ new residency program. The second comes from how Forest Town is structured.

Given no restraints beyond its central proposition of the mistreatment of women, the ten playwrights have created a diverse series of works thematically connected. “They were allowed to be flexible through style, genre, and time,” says Robins. “As a result, we have very different pieces that span from ancient Greece to the year 2100.”

While ten of the works are original and new, the eleventh comes from 18th-century Italian playwright Carlo Goldoni’s Servant of Two Masters. It is also where Forest Town gets its title.

As Robins explains, there is a scene in which a male character mistreats a woman, and her maidservant stands up for her: “She has a speech about how if the world were to end and women were in charge, and she was queen, she would make every man who mistreated a woman hold the branch of a tree in his hand, and she suggests in that world, all towns would look like forests.”

While the scene from Servant of Two Masters will act as the prologue to Forest Town, the bulk of the anthology comes from a diverse group of playwrights from established to emerging artists.

“It was just a matter of reaching out, trying to explain this crazy concept and what we’re going for and seeing who was interested,” says Robins. “We’re lucky that we had a good amount of interest, and it wasn’t so hard to find writers in the city who were interested in contributing.”

Diversity didn’t just come from playwrights at different points in their careers, though, as the project also includes writers along the gender spectrum.

“Another reason that I was so passionate about the theme and the issue was that I would never be able to write about it properly because I have never experienced what women have experienced,” says Robins, who is also one of the playwrights. “Opening up the writing was a way to bring in as many voices as I could to not only enlighten the script but also enlighten me.”

What surprised Robins was just how little the differences were in how the playwrights, regardless of gender, approached the theme. Even in acknowledging the playwrights as progressive and open-minded, he believes it speaks well to the understanding of our patriarchal history. “They are all incredibly different scenes, but thematically they all very centred and you don’t feel a lot of bias,” he says.

As for why someone should take a chance on Forest Town, Robins believes that beyond its probing theme, what audiences will see is also new and unique. “I think it’s well worth seeing just to see what it looks like to do a play this way, to do a play written in chapters by different playwrights centred around a theme with each chapter being a different genre and style,” he says.

But Robins also wants potential audiences to know that while it might be challenging to define a show like Forest Town, it is is also not as serious as it might sound. “It’s also about something that is at times incredibly frivolous,” he says. “I think if people come in expecting something eclectic and completely different from scene to scene, they’ll have at least a hint of what they’re in for when they come to see Forest Town.” 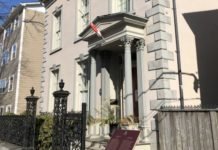 Steady Theatre steps out for Listen to the Wind