Andrea Scott’s new play Controlled Damage, currently receiving its world premiere at Halifax’s Neptune Theatre, maybe about Canadian civil rights trailblazer Viola Desmond. But thanks to some inventive staging, it is so much more than a simple history lesson.

On November 8, 1946, Black Nova Scotian Viola Desmond walked into a New Glasgow movie theatre. Unaware the theatre was segregated, Viola took a seat on the main floor instead of in the balcony where Black patrons were expected to sit. She was eventually arrested and dragged out of the theatre.

Bolstered by support from her community, Viola would eventually challenge the charges brought against her to Nova Scotia’s Supreme Court. Her stand against injustice would galvanize Nova Scotia’s Black community and helped inspire Canada’s civil rights movement.

But while Scott’s play most definitely deals in the specifics of Viola’s act of defiance, she is much more than merely the face of the Canadian ten-dollar bill. By humanizing her story, Scott highlights the very personal repercussions of Viola’s actions and vividly illustrates the systemic racism in Canada at the time. It also becomes a reminder of where we have come as a nation, but more importantly, it is a powerful reminder of just how far we have yet to go.

Much of Viola’s story is told through a traditional narrative as it chronicled her life just before her arrest through to her untimely death in 1965. While a fascinating history lesson in itself, it is the theatricality the playwright and director Nigel Shawn Williams have infused inside the story, which elevates Controlled Damage beyond a typical bio-play.

Case in point is this production’s terrific ensemble who not only play the various characters to help tell Viola’s story but also become a de facto Greek chorus.

Called upon to witness, highlight the action, and provide musical interludes, their most impactful scenes come from the portrayal as the movie patrons who were present when Viola was dragged from the theatre. With the ensemble wearing white masks, the scene is a startling visual metaphor heightened by director Williams’ affecting staging. In another particularly moving scene, a mask is removed and a secret revealed.

In another inspired choice, the ensemble is dressed in modern clothes from costume designer Brandon Kleiman. It is in stark contrast to Viola’s beautiful era-specific clothing, becoming another metaphor, reminding us that while what we are watching is historical, its implications transcend time.

As Viola Desmond, Halifax actor Deborah Castrilli gives a tremendous performance. Virtually on stage for the show’s entire two-hour run time, there is an understated strength in her portrayal.

Doing double-duty as a member of the ensemble and Viola’s husband, Ryan Allen is a towering presence, even while he would eventually crumble under the weight of Viola’s decision to challenge her arrest.

Brandon Kleiman’s wonderfully evocative set of wooden benches is reminiscent of a church, which figures prominently in Viola’s story. The exploding and slightly angled walls touch on the notion of history and mirror back our modern discomfort with what we see on stage.

Projection designer Nick Bottomley provides some witty surtitles. And in a particularly resonant moment, the faces and names of Black Canadians of note are projected against Kleiman’s set while the ensemble sings.

Underscoring the potential of live theatre, there are layers to Controlled Damage that are missing from other mediums. While the history lesson in itself is reason enough to see it, these additional layers are what makes it that much more compelling.

With the run at Neptune Theatre now officially sold-out, one can only hope it gets a remount. 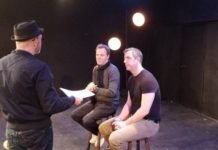 Big changes are coming to Halifax’s 2b theatre company 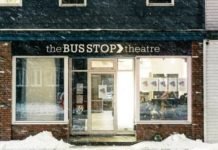